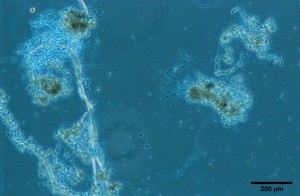 Filamentous bulking has long been the bane of activated sludge operations. Biomass or sludge bulking is generally defined as mixed liquor with a Settled Volume Index (SVI) of >150 ml/g. However, sludge bulking does not definitively translate to a sludge bulking problem in the secondary clarifier. Even the slowest settling sludge can be managed if the clarifier is large enough. The problem arises when the settling characteristics of the sludge exceed the capabilities of the clarifier.

This takes us to aerated stabilization basins (ASBs), where mixed liquor concentrations are very low (usually less than 300 mg/l) and settling zone times are measured in days rather than hours. Therefore, the concept of bulking sludge is not usually applicable in ASBs. As long as there is adequate time in the quiescent settling zone, effluent water quality will usually be acceptable. High effluent TSS leaving settling ponds is more often related to dispersed bacteria from BOD overloading floating solids due to anaerobic activity in the benthic layer of the settling zone.

Certain species of filaments are quite common in aerated stabilization basins in the pulp and paper industry. One of the most common is Haliscomenobacter hydrossis, a small, sheathed filament that is often seen growing outward from floc particles described as “pins in a pincushion.” H. hydrossis can also have a bent shape and there are no septa between the cells. In ASBs where floc is often minimal, H. hydrossis can be often found free in the bulk water. Because of its small size, it is often overlooked when only brightfield microscopy is employed.

While we frequently see common or abundant levels of this filament in aeration basin samples, it rarely makes up a larger portion of the effluent total suspended solids. It is, however, a useful indicator of system health relative to loading and dissolved oxygen and its appearance can be a useful tool in heading off problems before they become crises.

For most information on filaments in ASBs, contact EBS. 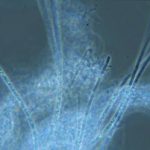 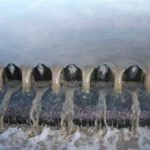